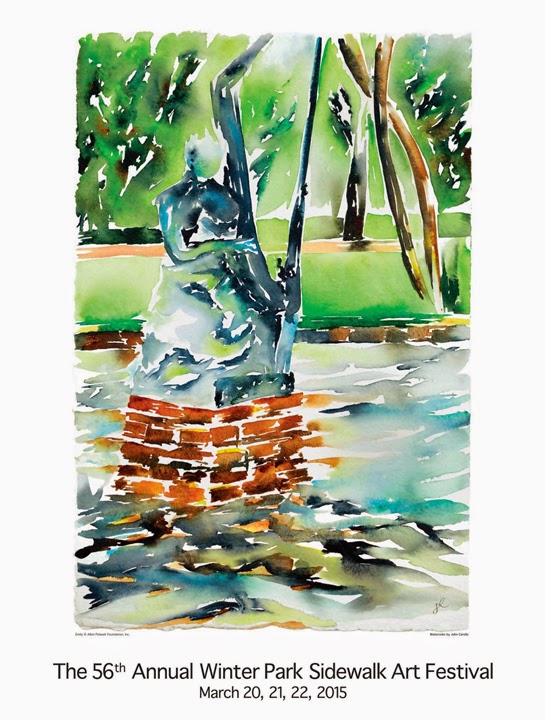 WINTER PARK, FL Orlando/Winter Park-based abstract watercolor artist John Carollo's new work, "Emily's Light" is the poster image for the 56th Annual Winter Park Sidewalk Art Festival.
Created specifically for the poster and as a signature image for the annual Festival, the painting is a unique interpretation of a beloved Winter Park icon, the Central Park-situated, Albin Polasek sculpture, "Emily," a piece which holds special meaning to Carollo and his family.

Brought to life by the artist's distinctive Controlled Chaos painting style, where the water and paint move freely to create unusual atmospheric effects, the work aims to help the viewer feel the sensation of being near the edge of the fountain on a warm, sunlit afternoon in the park.

Officially unveiled to the general public during a ceremony at the historic Casa Feliz home in Downtown Winter Park on February 5, posters and other items featuring the image will be available for purchase at the Festival, Thursday, March 20 - Sunday, March 22, 2015.


WATCH THE PAINTING COME TO LIFE


Creation of the painting, from blank sheet to finished piece can viewed on the artist's YouTube channel: www.youtube.com/nakedeye32801. 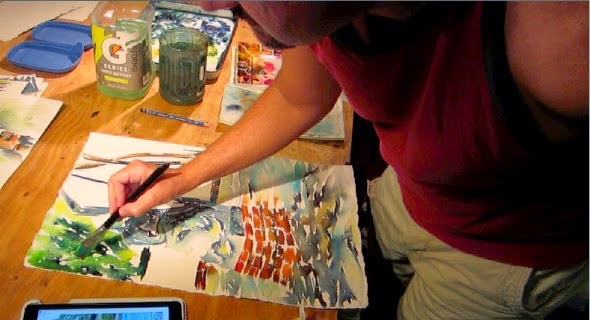 John Carollo began studying Watercolor in college at the University of North Texas under the instruction of the internationally renowned artist Rob Erdle. Having initially approached the medium with a goal of producing realistic works, a summer study trip to Europe quickly cured those impulses. During the course of the journey, and continuing upon his return, John’s work took on an increasingly expressive, stylistic flair, meant to convey the mood, emotion, and essence of a scene rather than a literal interpretation of what the eyes might be recording. His loose, free-flowing style allows the water and paint to often move on its own with minor guidance, in a technique he calls Controlled Chaos. The end result showcases watercolor’s unique properties of translucency and atmospheric effect. 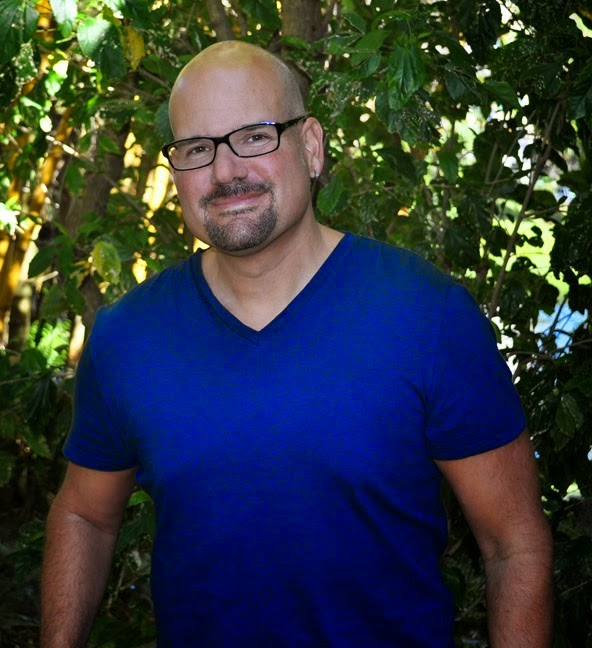 Since 2005, John has shown his work extensively in numerous venues in Texas, Georgia and the Central Florida area, including the CityArts Factory, Maitland Art Center, and Mount Dora Center for the Arts, as well as through collaboration with Voci modern dance company. In both 2007 and 2012 he was awarded prestigious United Arts of Central Florida Artist Development Grants, for his work with large-scale watercolor (over 6’) and 3D kinetic sculpture. The latter area has been a continuing source of exploration for the artist, with his work evolving from shaped paper and wire constructions to very large suspended pieces created from hand-painted silk, twisted aluminum and stainless steel. The largest of these to date at over 13’ x 16’, Icarus Ascends, premiered in 2013 and was designed for expansive atrium and transit center public art spaces.

Beginning in 2010, much of John’s creative energy has gone into The Figure As Vehicle, a travelling two-person collaborative exhibition with sculptor Marsha De Broske. Containing nearly 50 works by the two artists, all featuring the human figure in various interpretations, the show portrays the body as a vehicle for conveying messages to the viewer through mood, contemplation, personal connection and understanding. Ever-changing, the project highlights both artists’ ability to capture the essence of motion in their work, and has to-date been shown six times throughout Florida and Georgia at galleries, colleges and centers for the arts.

The Winter Park Sidewalk Art Festival is one of the nation's oldest, largest and most prestigious juried outdoor art festivals, consistently rated among the top shows by Sunshine Artist and American Style magazines. In 2013 and 2014 it was voted America's Best Juried Fine Art Fair by Art Fair Calendar.com readers. Each year more than 350,000 visitors enjoy the show.

Every year about 1,100 artists from around the world applied for entry and an independent panel of judges selected 225 national and international artists to attend the show. The National Endowment for the Arts, The White House, Congress and many others have lauded the Festival for promoting art and art education in Central Florida. An all volunteer board of directors runs the annual Festival, now celebrating its 55th year.

The Winter Park Sidewalk Art Festival was started by a handful of enthusiasts as a community project to benefit local artists and art lovers. The first festival was held on Park Avenue in March 1960. The festival featured original works of art and, after being advertised for just three weeks before the opening, drew 90 exhibiting artists. Over the next decade, the festival grew to over 600 artists and was spread out over Park Avenue from Fairbanks Avenue to Canton Avenue and on all cross streets. For the past 30 years or so, the festival has been contained solely in the park area and currently features 225 artists and 3 emerging artists. A loving art community has created and nurtured a successful festival that looks forward to another 50 years in Central Park.